OSAP changes affect students from all walks of life.

Jan. 17, 2019 marked the day the Ford government ushered sweeping changes to the OSAP program. Among other things, some of the major changes made to the program include removing the six-month interest-free grace period upon graduation before students are required to repay their loans; changing requirements to be considered an independent student (where your parent’s income is not factored into your OSAP eligibility); and making mandatory non-tuition fees optional.

I have been enrolled at Humber for two years. I have two more years left before I graduate. When the changes to OSAP under the previous government in 2017-2018 were announced, they were a breath of fresh air for a lot of students. I know for myself, when the changes were made so that OSAP would not judge my eligibility against my parent’s income, I was utterly relieved. Prior to those changes, I had barely received enough assistance (between both grants and loans) to cover my tuition, let alone high living expenses. 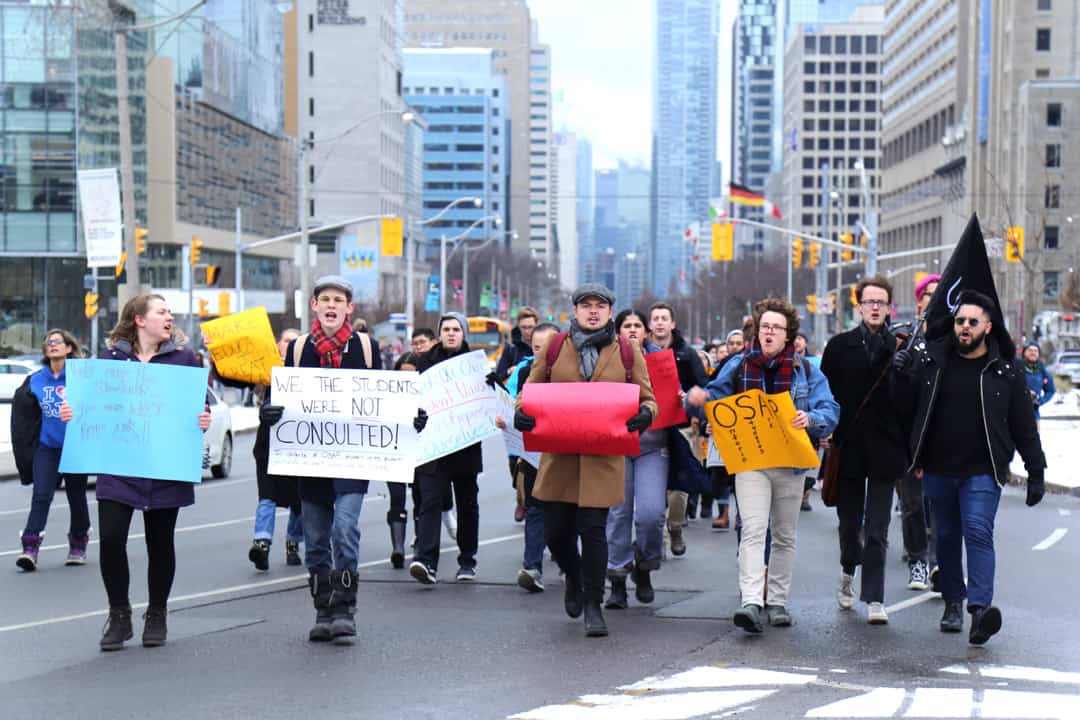 Since moving to Toronto, I have been in a perpetual state of shock at how high the cost of living is. Students who are able to continue living with their parents during school are very lucky. My hometown is 16 hours northwest of Toronto. As a result,  I have been forced to rent an apartment—and it is not cheap. Of the total amount of OSAP I received this year, well over half has gone towards paying my rent. But even the total amount of my assistance wasn’t enough. I still had to take a part-time job just to be able to put food on the table and pay transit costs. Along with the other hidden expenses that come with being an adult.

With these new changes comes a whole host of challenges for students like me. I am more or less financially self-sufficient. My parents help me out sometimes, which I greatly appreciate, but I pay for day-to-day expenses independently.

Why should my parent’s income be factored into my application OSAP when I am already independent of my parent’s financial support? Under the new rules, you have to be six years out of high school to have your income be considered on your OSAP application, compared to the four years of the previous OSAP program. Under the previous government, while considered a dependent student, you could still qualify for OSAP even if your parental income was up to $175,000/year. The amount your parents were “expected to contribute” was significantly lower as a result. This new system has lowered the eligibility cap to $140,000 of total annual parental income.

Receiving grants will also become far more difficult for low-income students. While the changes are cited as attempts to redistribute OSAP to those most in need by targeting those with below $50,000 of annual income, those recipients now cannot opt out of the loan portion of their assistance.

Under the previous government, students who qualified for free tuition could choose to not accept the loan portion of their funding. Ford has made the receipt of a loan mandatory in order to receive any assistance. 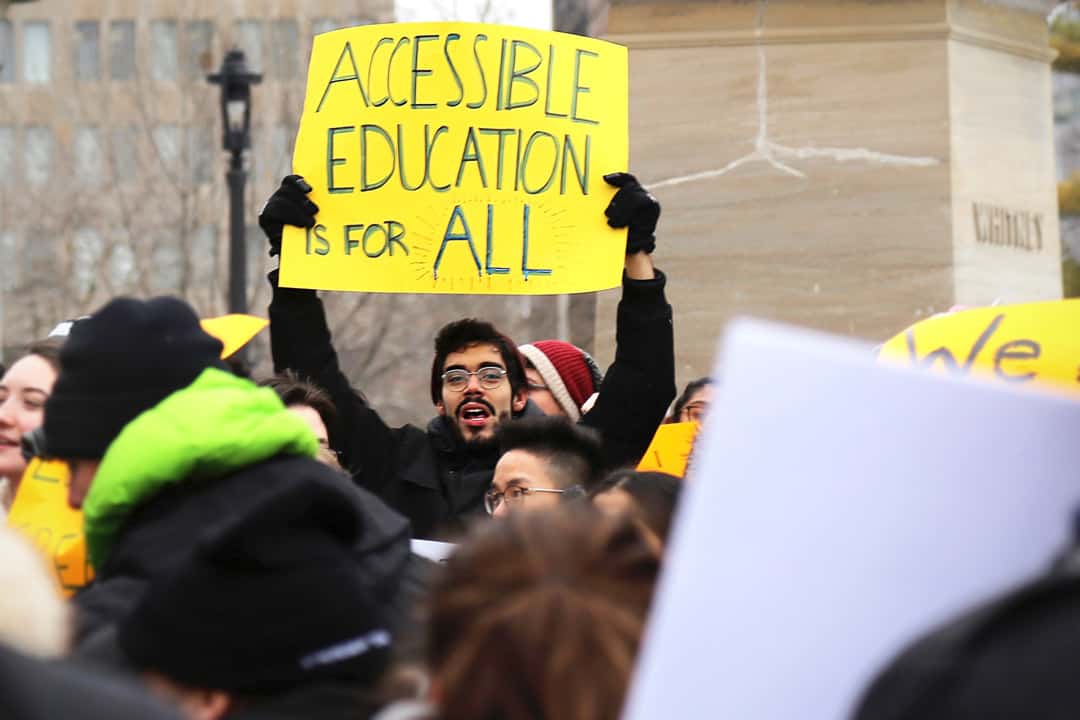 So what do these changes mean for students?

For me, it means that I will lose my OSAP funding. This year, I will be four years out of high school. In the next academic year, I will be five years out of high school and would continue to be considered an independent student under the old framework. My parents are fortunate enough to make more than the new threshold. Since I will lose my funding, I will have to seek an independent bank loan. However with bank loans comes so many more problems, including higher interest rates, and having to find a cosigner. As of right now, I do not have anyone who will sign for my loan.

Without OSAP I could be forced to drop out of my program.

These changes don’t just affect the lowest income students. They also affect the middle class as well. When OSAP decides how much money a dependent student is eligible for, they only take into consideration parental gross income. They don’t look at any financial liabilities, things like income taxes, mortgage debt, car loans, their outstanding student loans, living expenses, high property taxes, medical expenses not covered by OHIP, etc. They just make assumptions based on your overall income, that if you make over a certain amount, you must have enough left over to be able to cover the cost of your kid(s) going to post-secondary.

However, this is not always the case.

In my case, my parents do not have any extra money at the end of the month to help me pay my way through school. And I’m not the only one. So many students I know personally and have seen on social media are relying on the tuition grants (and OSAP generally) to fund their education. One report has shown student debt is at crisis levels with “university students graduat[ing] with an average debt of $16,727 and college students have an average debt of $10,172.”

Removing the six-month interest grace period is also a major concern for students. While this doesn’t affect me personally right now, it certainly will in the future when (if) I do graduate. While students can still wait six months before they start paying off their loans, during that six month period their loan continues to accrue interest.

Using data from the current OSAP interest scheme and prime interest rate, doing a rough interest calculation for a $30,000 loan (an estimation of the total of my OSAP debt when I graduate), that extra six months of interest would amount to approx $892 extra that would students would be responsible for repaying. Perhaps that may not seem like a lot of money, but interest adds up the longer your repayment term.

Ford’s government changes will also have an adverse affect student life. Without the ability to raise enough funds, so many students will be going without programming that makes dramatic impacts on their lives, such as the IGNITE bursary or financial relief fund or the over 100 students who are employed part-time with IGNITE. These changes affect the most vulnerable students.

IGNITE President Monica Khosla wrote a powerful statement about the impact losing IGNITE funding would have on our student body. I, along with many other students, (part-time employees and students alike) have found a home at IGNITE, and have cultivated life-long friendships through the spaces they provide. IGNITE is an integral part of campus life for Humber and University of Guelph-Humber students.

I know all of these changes are scary and uncertain for many of us. However, there is a way we as a student collective can fight back and try to regain control of our post-secondary experience. A petition has created through Change.org which you can sign to have your voice heard! At the time of writing this petition already has 233, 521 signatures and growing.

If you have been negatively impacted by the OSAP changes like me, please join us as we march on Queen’s park on February 4th. We will be joining in the Province-Wide March for Student’s Rights and representing all Humber and U of GH students.

I encourage everyone to find a way of getting involved in the conversation and do their best to fight back. Our education is at risk.

We can fight these changes together! If you have any questions about these changes are going to affect you or your time at Humber or UofGH, please contact us. We are here for you!